A Brief Look at the Technologies Getting Us There

We still seem to be a good distance away from the flying car, so Back to the Future was a bit off on that one, but that’s about it. Today, we are at the starting line to autonomous driving becoming mainstream. There are already plenty of level 2* advanced driver-assistance systems (ADAS) features widely available and it is predicted that by 2025 fully autonomous vehicles will be on the road.

Tesla has been extremely outspoken about their preferred technology. They explained people have been driving cars for years using only their eyes, and they have gotten by pretty well. Tesla decks out their cars in a series of cameras facing every direction, plus one radar unit at the front. Combine these tools with machine learning software, the car not only has full coverage of its surroundings but can also make decisions as quickly (if not faster) than a human being.

The Pros of Cameras

To begin with, it is an established technology, so incorporating them into a vehicle, is not re-inventing the wheel. This makes them cheaper as well. The cost of cameras is significantly lower than other technologies. Plus, they are small. It is very simple to blend cameras in to any point of a vehicle, keeping them disguised, protected, and looking slick.

Vanity aside, safety is probably the biggest advantage to cameras. By combining cameras with the right AI software, the vehicle will have the same abilities as humans have. Unlike LiDAR, cameras will not be affected by precipitation or fog (any more so than a driver’s eyes) and will have the ability to distinguish colors and read road signs. It’s a big deal.

As Tesla stated, cameras mimic human eyesight. There are situations that can arise where that may not be good enough. If something is blocking the camera’s view, it simply can’t see. They also cannot work independently…a camera alone is not enough. It is vital that the car has the right machine learning software and a processor powerful enough to support it. Until recently, this did not exist.

LiDAR is also very well received by the automotive industry for its ability to create digital 3D images of one’s surroundings. This is done by shooting lasers at its target and measuring the changes in the reflection with sensors. Several companies like Volvo are moving forward this way.

The Pros of LiDAR

LiDAR can do what cameras can’t. It is incredibly accurate and can predict the way the surrounding environment will behave. This includes people crossing the street or a motorcycle changing lanes. With its 3D imaging, anything surrounding the vehicle is precisely tagged. Additionally, working with lasers prevents obstacles that may be a distraction for cameras (like a bright light) from affecting the quality of the image and data transmitted by LiDAR.

The last thing LiDAR can do that cameras cannot is think. LiDAR can instantly recognize how far away an object is and which way it is going. A camera will only see, it needs a computer with brilliant software to process what it is looking at.

Well, it ain’t cheap. LiDAR is still a technology that is being developed and costs are beginning to go down but not to the point of cameras. Another way it differs from cameras is its size. While cameras are small and dainty looking, LiDAR units are bulky and can be severely impacted by weather. They are also unable to distinguish subtleties, such as colors or characters which makes road safety a challenge.

Plus, with LiDAR being a newer technology, we don’t know what we don’t know. Today, LiDAR is being used sporadically and we do not have any evidence on how this will affect the car (or the world) in the long term. We do know that with more cars simultaneously sending out laser signals there is a great potential for interference. Will LiDAR continue to work under these conditions? What about the mechanics of the car? Can it affect a person’s health? The planet’s health? Time will tell.

At the end of the day, these cars are coming and there is simply more than one way for them to get here. Some will use cameras, some will use light, some will use both. So sorry Doc Brown, where we are going we’ll still need roads, we just won’t need drivers.

For more information on ADAS testing please speak with one of Averna’s experts. 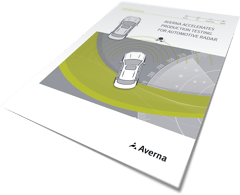 Autonomous driving wouldn’t get anywhere (pun intended) without radar! See how we helped this automotive giant accelerate manufacturing in this case study.