It’s Time to Walk Down to Electric Avenue

What Else is Going Green?

Electrification is one of the hottest buzzwords going around the automotive world these days. This is due to a perfect convergence of two critical factors. The first is a heightened concern regarding climate change and the second is a major improvement in the performance electric automotive components.

So, what is electrification?

Simply put, electrification is the replacement of technologies using non-renewable energy sources (coal, oil, and natural gas) with technologies that use electricity as a source of energy. There are different renewable sources for energy including wind, solar, nuclear, hydro, and geothermal amongst others. These all reduce greenhouse gases, namely carbon dioxide (CO₂), from being produced.

What is the Story?

Climate change is really happening and is caused by the emission of greenhouse gases. It accounts for both rising temperatures and anomalies in weather patterns. It is responsible for wildlife picking up and moving their habitats (or disappearing), rising sea levels, and melting ice caps. CO₂ makes up about 75% of these emissions and as of 2018 had reached its highest-ever monthly average at 411 parts per million.

This number has grown substantially due to mankind burning fossil fuels and releasing CO₂ into the air. Carbon dioxide absorbs the heat from the sun and keeps it close to home instead of releasing it into space. Not good.

Where is it Coming From?

Greenhouse gases come from everywhere. The transportation industry is not the only sector contributing to the world’s CO₂ emissions, but it is a solid one. About one fifth of global CO₂ emissions come from road, rail, or aviation travel. Of the three, rail is the smallest contributor at only 1%. Air travel has a terrible reputation but only accounts for 11.6% of transport emissions. It is road travel that really brings it home at 74.5%. 45.1% of the total comes from passenger vehicles including cars, buses, and motorcycles. The remainder is attributed to freight trucks and lorries. 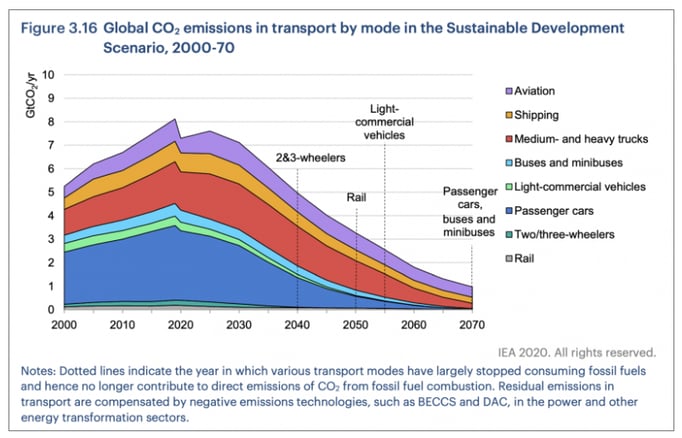 And Now Back to Electrification…

Countries and industries are all putting in the time (and money) to support electrification. For passenger vehicles, the magic number is 2030. This is the year most automotive companies have committed to either significantly reduce or eliminate the production of new internal combustion engine vehicles. These will be replaced with high-performance, sleek- looking electric, gas-less vehicles.

To back up the automotive manufacturers, worldwide governments are providing major incentives to car buyers to go electric while investing billions of dollars to expand charging infrastructures. All the fears (and costs) associated with buying EVs are dissipating very quickly, and it is showing. In the first half of 2021, EV sales have increased 168% over 2020.

Electric All the Way?

While major progress is underway in the biggest problem area, not all facets of transportation are in as good shape. Trucks, as the second-largest contributor of CO₂ in transport at 22.4%, have a long way to go. The wheels are certainly rolling, but not onto our highways just yet. The enormous weight of both the vehicle and the load make the electrification process more challenging and more expensive. The COVID-19 pandemic created a delay in R&D and testing but 2021 will show a start to production. It is likely that medium-sized trucks will start it off. The batteries required to get them going are smaller and they benefit from regenerative braking. Big rigs are expected to take much longer as the battery requirements are more substantial and therefore more expensive.

On May 28th, 2020, the largest e-plane (known as the eCaravan) took a 28-minute flight above the state of Washington in the United States, reaching 100 mph. With a 750-horsepower electric motor and 900 kgs of lithium-ion batteries, the plane accommodates 9 passengers. Electronic flight is currently in the middle of the road of its development. Today, several manufacturers like Eviation are working on all-electric commercial aircrafts.

To make this a mainstream method of transportation, there are still challenges to overcome. Airplanes travel much longer distances without a charging station nearby. They are also much heavier and carry heavy people who bring heavy luggage. Fully electric commercial passenger planes are still a dream of the future, but meanwhile hybrid-electric air travel may be a quicker response. By combining electric power with fuel, it is a good start to reducing the carbon footprint until manufacturers can get all the way.

Trains, on the other hand, have been electric for a long time. The first electric train was revealed by Siemens in 1879. The train carried up to 25 people at the speed of a horse-drawn wagon. Since then, high-speed applications have been designed and implemented throughout countries as efficient and affordable means of travel. Siemens most recent example is the Velaro high-speed platform. The newest line expected for release in 2023, will be 10% bigger yet 30% more efficient. These trains will reduce CO₂ emissions by 1,375 tons every year.

This is only one example of many electric trains rolling the tracks. The maintenance costs are about 20% less than diesel engines but unfortunately, they are not fully implemented worldwide. The upfront costs of a diesel engine infrastructure are less expensive than electric. While it has been proven over time that electric trains are cheaper to run, some countries took the diesel route from the beginning, and they are still at it. For example, in the United States, less than 1% of railways are electrified. Some US states are in the process of adopting electric railways. Included in this endeavor are Missouri, North Carolina, Texas and the Midwest who are scheduled to host the first Virgin Hyperloops along with Saudi Arabia and India.

There is still work to be done regarding the electrification of all modes of transport, but it is certainly happening. This is an historical time to be living. Innovation is everywhere and through proper research, development and test, mankind will restore the earth and its climate.

How does one make a plane fully electric? Power-by-wire! Read more about PBW in this white paper.