More industries like automotive and EV, energy production, industrial applications and others are switching to greener pastures. Whatever the motivation, be it a government imposition, a financial grant or a moral compass, progress is in the works. Ironically, testing these greener applications requires a much higher amount of power, voltage and current…

Is this Murphy’s Law, hard at work? Well, no. When dealing with more voltage and current, you need to test at higher rates and for longer. For automotive, this is in the range of 200-1000V. Other applications can be much higher.

More and more companies are using V2X technologies in the transfer and optimization of power usage such as Vehicle to Home or Vehicle to Grid. This technology is not limited to the automotive industry, but industrials as well. For example, Eaton is recycling old car batteries to power a football stadium in the Netherlands.

When dealing with V2X testing, we are generally testing power bi-directionally. That means both directions must be considered, vehicle to home as well as home back to vehicle. Power is not only being pushed out, but we are also pulling from it. This power needs to be managed.

Today there are already a lot of manufacturers announcing dual, four quadrant regenerative power supplies. So, while this is a relatively new technology, the demand and instruments are there. The key is integrating them into a larger system to be able to test.

It’s an interesting time because the new instrumentation being released is using the same power devices you would find in efficient products like silicon carbide. Understanding the instruments, the test processes, high-power usage, and the application is crucial. These elements apply from the beginning of the product development to mass production and support.

Bi-directional testing creates a scenario where power is fed back into the facility, and then back on to the power grid. As with any closed loop system, the system in test is vulnerable to stability issues, especially under highly dynamic conditions. This needs to be managed because it can become problematic very quickly. Depending on the conditions and the amount of equipment running, a system could easily take down the whole grid. This is why there are strict compliance regulations for this type of testing, and they vary from country to country. In certain countries, it is illegal to put power back into the grid.

Controlling a large output of power here is one thing, but in the case of bi-directional you in a testing the user is essentially doubling down on the energy creation. There is a power supply that is pulling from the grid, while simultaneously the load is also pulling from the grid. If unmanaged this results in producing massive amounts of heat. Imagine having 3 ovens running on high with all the burners on in a standard kitchen. This is too much and there will be a lot of waste and instability, which is very dangerous. Anything cyclic is prone to stability issues with overshoots, oscillations, positive feedback, and other issues. The result of this is that on top of being an impossible place for a person to work, the heat will damage the equipment. The PCs and other electronic components become unreliable, defeating the purpose. The system that is working and generating all this heat must have a backup safety system, in case cooling fails.

This is an unreasonable working environment for anyone, and buildings are not customarily designed to accommodate this. It can be assumed that the HVAC cooling system will be insufficient and all the ducting in the facility will need to be redone. Anyone who has done a home renovation knows this is not cheap and it is extremely time consuming. This power usage can also get very expensive. This type of scenario means kilowatts-hours upon kilowatts-hours over the course of years. This then becomes Mega-Watts.

The only logical solution is to leverage regeneration equipment that can grab that energy and put it back into the test system for re-use. 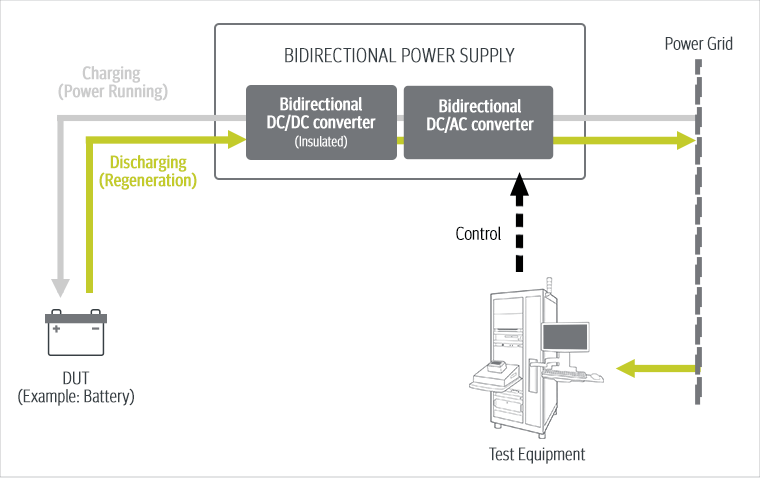 The energy that is put into the device is then regenerated back into the test system, perfectly recycled. Depending on the application, this can drop the energy usage up to 80% which is better for the planet, and the bottom line.

The reality of it though is that regeneration equipment has a significant upfront cost, which may have companies hesitate. That said, the ROI pays back very quickly for anything generating over 10 Kilowatts. It is comparable to whether one chooses to insulate their house. They may save some money in the cost to build their home but pay a lot more in heating bills over time.

Additionally, buildings are generally not set up for this kind of output if this wasn’t the original intention. By using cheaper instrumentation instead of a larger regenerative solution, money is being thrown at the wrong issue, likely creating a new problem. 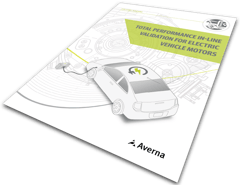 See how we used a battery simulator to recuperate any over expenditure of energy and reuse it to power the test bench itself in EV motor testing.